A History of Empowerment Through Education

Amy's work in American K-12 education began in 2000 at the national office of an educational technology organization whose mission of mobilizing a modern day peace corps connected high tech volunteers schools, teachers and students, preparing them for a technology-based future. Amy managed the development of state chapter offices across a diverse spectrum, from impoverished deep south states like Alabama, Arkansas and the Florida panhandle, to medium-sized cities like Atlanta and Indianapolis to large, resource-rich chapters in New York City and Chicago.

Her latest work builds on that early work as much as it does the ten-plus years she has worked across the Boston Public Schools landscape. She developed an award-winning life and career readiness program at an urban high school in Boston where she taught hundreds of students over the course of several years not just business and workplace skills, but also how to believe in their unique purpose in the world. Amy's consultancy, Empowerment Through Education, is built on a solid foundation of depth and breadth in education and seeks to empower the system, prepare students for life, and ignite a conversation.

Amy's work is a blend of vision, voice, strategy and on-the-ground implementation. She refuses to believe that it is not possible to infuse new ideas into the existing education system because she has done it for over a decade. It is possible and it is critical, but it takes clear strategy, relationships and on-going facilitated conversation so everyone knows what it will take. Amy works on fun and creative projects where folks are willing to think outside of the box. The work she does takes time and it stands to impact great numbers of schools and students. Here is a sampling:

Amy's trajectory and path through the education system is a bit unconventional. She began at the national level with her work at Tech Corps (see below) and then opened the Boston Public Schools chapter serving a district. When asked by Fenway High School's founder to consider applying for a position that would allow her to create and teach a curriculum that could prepare students for life after high school, she saw it as the perfect opportunity to walk the talk and to learn what only a classroom teacher knows. She taught and refined her business and career readiness curriculum over the course of six years through two classes called "Ventures." The Junior Ventures (11th grade) and Senior Ventures (12th grade) classes were both required for graduation. Click here to read much more about the Ventures Program - a model that truly works.

The Ventures curriculum was central to the program but these major components made it real for the students:

1. Bringing the community into the school:

Pictured to the left, Amy is speaking to a room of over 100 employers, professionals and community members who came to the school each year for a day-long career fair where students learned about jobs in the fields they were interested in, networked with professionals and practiced their interviewing skills (twice!) with HR professionals.

2. Taking students out of the school and into local businesses:

The school's culture supported "community as a classroom" thinking, enabling students to complete six-week full-time internships at a local business. The partnerships with local businesses like the award-winning relationship Amy established with Blue Cross Blue Shield of Massachusetts meant that students pitched their business plans (pictured here to the left) in the modern and professional environment

of the Blue Cross offices with many employees serving as judges.

Before Fenway, Amy's work in education technology was largely focused on building relationships and building bridges between schools, districts and high-tech industry. That carried through her Ventures program where she worked diligently to build relationships that met the needs and meshed well with local businesses. Here, Blue Cross VP of Corporate Citizenship, Jeff Bellows, welcomes guests to the annual business plan pitch event. Why did it work? Blue Cross employees got something positive and affirming from the experience and that in turn made them feel good about where they worked. It was a win-win.

During her tenure at Fenway, Amy advised on a popular city-wide technology program called Technology Goes Home (TGH). Still passionate about enabling access to technology from her earlier role, she consulted for the City of Boston's Digital Bridge Foundation in 2006 to design and write a teacher training manual for the TGH program. She trained school-based instructors on how to deliver the program at a number of schools throughout the city of Boston and became an instructor for the program when she began her role at Fenway.  For four years, she happily taught technology-based curriculum to Fenway parents and students in the evening and occasionally on Saturdays.

In the photo to the left, one of Amy's former students and her mother accept a certificate of completion from Boston Mayor Thomas M. Menino.

In 2003, Amy became the Director of the Boston Public Schools chapter of Tech Corps. She was tasked with building and directing the first ever Boston-based chapter of the national education technology organization. After serving for two years at the national level supporting state-level directors in the creation of similar programs, she built a very successful partnership with Boston Public Schools' Office of Instructional Technology and its director, Anne Grady. The close partnership provided her with the superintendent’s endorsement and in-kind office space and support in the district’s Instructional Technology department.

As the founding director of this initiative, Amy worked exclusively to recruit high-tech businesses such as Microsoft and Raytheon as well as individuals with engineering, hardware and software skills to provide a variety of resources and expertise to schools.  In under 3 years’ time, Amy established formal partnerships with heads of school at 20 BPS schools and placed 85 individuals into structured programs in those schools where they provided 2,000+ hours of service valued then at over $200,000. 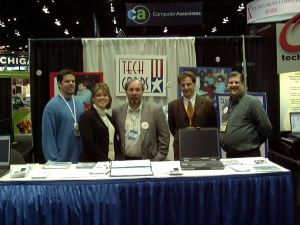 Hosting one of the few .org booths at Comdex in Las Vegas in 2001.

In 2000 Amy embarked on her mission to bridge industry with resources when she moved to Massachusetts to went to work building state-level chapters of a national education-technology nonprofit called Tech Corps. For two years she worked with state departments of education in several states, built boards of directors and trained and managed state directors in their efforts to bring technology resources, training and curriculum to schools, districts and teachers.

Her work from the national perspective was focused largely on states in the deep south and those in north and mid-west. She oversaw activities and growth of chapters in Atlanta, Georgia; Montgomery and Selma, Alabama; Tallahassee, Florida; Little Rock, Arkansas; New York City; Chicago and more. Amy gained insight into the incredibly varied ways American states and diverse communities approach improving education, engaging external support and resources but most importantly, she developed a deep appreciation for the myriad of challenges in these widely varied American cultures with one goal: Better preparing the future workforce. 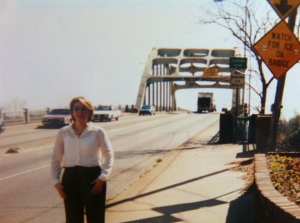 Amy Carrier in front of the Edmund Pettus Bridge in Selma, Alabama in 2002.

One of the most formative experiences of her work from this national perspective occurred on her trip to Alabama to support the newly forming chapter office in that state. Driving from Montgomery to Selma was marked by the reality of that long stretch of open road and all who walked it over those several days in 1965. Arriving in Selma was like stepping back in time. Look for Amy's story of her experience in Selma, Alabama on her blog. It is powerful and worth reading.

Pictured to the left is Amy in front of the Edmond Pettus Bridge in Selma, Alabama in 2002. Above that, Amy co-hosts one of the very few nonprofit booths at Comdex in Las Vegas in 2001.