What happened when these students in Boston, Massachusetts (on the left) learned about these girls (on the right) and their many sisters in Kenya will touch your heart and make you believe in what our children are capable of when we empower them to follow their hearts. 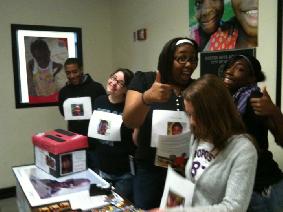 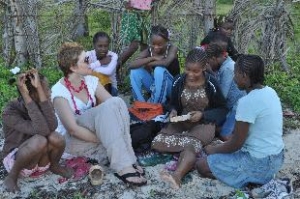 Student to Student, Heart to Heart Across the Miles

During a class discussion on global issues, Amy told her students the story of her volunteer work for an orphanage in Kenya and that the founder, a well-known social justice advocate in Kenya, was planning to visit to the U.S. soon. Her students were deeply moved by the stories of the girls' lives and their deep desires to get an education. The American students wanted to become involved. They wanted Anthony Mulongo, the Kenyan founder of Mudzini Kwetu Centre Trust (the orphanage in Coastal Kenya), to come speak to their school. Mr. Mulongo was invited and he accepted. Mulongo is a lawyer, social justice advocate, former international journalist and founder of the first African chapter of the International Justice Mission so he had many stories to share with the Boston students.

The students organized an assembly because they felt it was important to support disadvantaged children in Africa. The audience, consisting of the entire student body, faculty and a number of alumni, was extremely touched - and as you will read below, the care and concern did not end when school was dismissed that day after Mulongo spoke. Scroll down to read more and view the slide show.

In the weeks before Mulongo's visit, Fenway students began a letter writing campaign to be sure that each of the 36 girls at Mudzini Kwetu received a personal letter and small gift from an American student. A group of Fenway students took that idea - and their passion for contributing money towards the building of a new school in Kenya - and expanded it into two fundraising events, one on the day of Mulongo's visit in October and a second soon after on election day in November.

On the day of Mulongo's visit to Fenway High School, 300 students who represented the population of Boston's public school families, nearly 80% of whom live at or below the poverty level, chose to reach into their own pockets - after lunch and snack money had been spent for the day - and donate what they felt they could. The students were so moved by the stories they heard about the girls on the other side of the world and Mulongo's plan to build them a school they could attend for free that they donated nearly $220.

The students would not stop there. They knew they could do more and so they did. Students sold snacks during break time at the school. Because the school is a polling site, they also organized an election day fundraiser that was so well received that one voter, a writer for the local paper, felt that the students deserved to be recognized for their efforts. You can read the article he wrote for the Fenway News here.

The students raised nearly $800 to send home with Mulongo. He was beyond touched.

“Never underestimate the power of a small group of committed people to change the world. In fact, it is the only thing that ever has.”

Graduates Support Ms. Carrier's Cause Too

Amy Invites a Group of her Graduates to Support the Cause and Meet Nelson Mandela's Former Son-in-Law, The Prince of Swaziland

Another group of Amy's former students, graduates of the class of 2009 and freshmen at various colleges, joined in the efforts to support Mulongo's work in Kenya as well. They volunteered to help run a high-end ticketed fundraising event Amy co-organized at the French Cultural Center in Boston in May of 2011. The alumni met and mingled with socially conscious adults concerned with doing good in the world. They had the opportunity to meet the former son-in-law of Nelson Mandela (married to Mandela's daughter, Zenani Mandela) Prince Thumbumuzi Dlamini of Swaziland. Thumbumuzi attended Boston University and has long-time ties to Boston. 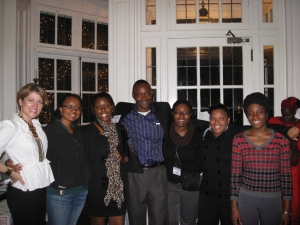 “We need to promote greater tolerance and understanding among the peoples of the world. Nothing can be more dangerous to our efforts to build peace and development than a world divided along religious, ethnic or cultural lines. In each nation, and among all nations, we must work to promote unity based on our shared humanity."